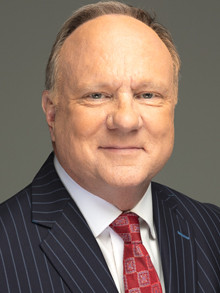 Every fall, Clay's principal duties include covering Ohio State football and field anchoring the pre-game and post-game coverage on the Emmy Award-winning “The Football Fever”. Memorable stories filed for the Fever include: Quizzing President Gerald Ford about his only loss to Ohio State, the temporary heist of Penn State’s cassette tape of the Lions growl, the rise, fall and rebirth of Maurice Clarett, Urban Meyer’s return to his childhood home and national championships won in Tempe, Arizona & Jerry’s World in Arlington, Texas.

Hall has staffed games from Tucson to Raleigh and Seattle to South Beach and his top press box meals include: Jambalaya in the Superdome, Pike Place salmon in Husky Stadium, prime rib at Rutgers and the best hot dog in the Big Ten at “Mustard’s Last Stand” at Northwestern.

Clay is an Upper Arlington High School graduate who caddied at the OSU Scarlet Course as a teen. He later teamed with veteran OSU & NFL coach Fred Pagac, Sr. on the same course to knock off Brent Musburger in a media scramble back in the day.

Hall and his wife Patricia have three sons. Miss Lily is the family’s pet canine.