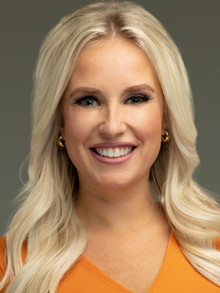 You can find Katie McKee on Good Day Columbus updating your morning commute every morning from 4:25 a.m. to 10:00 a.m. She joined the team back in June 2017 as a traffic reporter/anchor.

Katie is from Springfield, Ohio, and finally returned back to the Buckeye State after several years working for other news stations in the Southeast as a field reporter.

After graduating from Ohio University with a degree in Political Science, she eventually landed her first reporting opportunity at the Fox Affiliate in Columbia, South Carolina. There she broke a story of a missing 15-year-old girl named Gabbiee Swainson, that eventually made national headlines.

Katie stayed in Columbia for 3 years finishing her time in the Palmetto State at NBC Affiliate WIS where she worked as a morning reporter and anchored the noon newscast.

In 2015 Katie moved to Jacksonville Florida, for a reporter position at CBS/FOX.

During her time in Florida, she spent a week in Orlando covering the Pulse Night Club Shooting as well as Hurricane Matthew and the aftermath of the storm.

Katie now lives in Marysville with her husband and two precious pups.